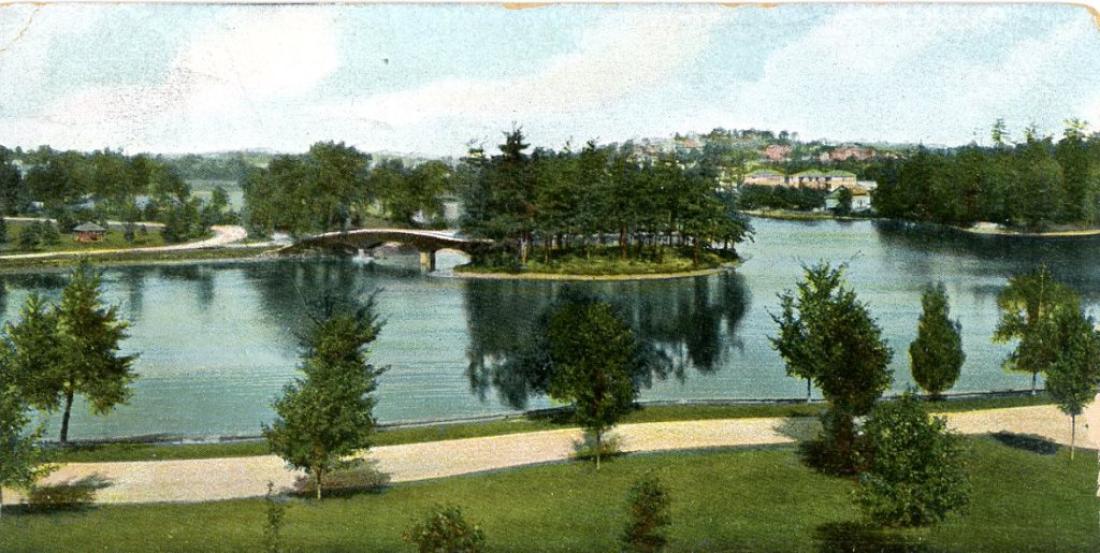 On ancestral land of the Nipmuc (fresh water pond place) Indian people, the genesis of Institute Park and Salisbury Pond can be traced more recently to the Salisbury family, prominent merchants from Boston. Stephen Salisbury I (1746-1829) was persuaded by his brother Samuel to move to Worcester to open a branch of the family business. When the venture proved a success, Samuel encouraged Stephen to buy land and build a house and store. In 1797, Stephen married Elizabeth Tuckerman and they had three children, only one of whom survived to adulthood. Stephen Salisbury II (1798-1884) enjoyed a brilliant career as a gentleman farmer, industrial developer and civic leader.

In 1834, Stephen Salisbury II dammed a brook (known as Mill Brook) to provide a body of water to supply power to a small wire mill he had built for Ichabod Washburn, a prominent Worcester industrialist. The body of water, named Salisbury Pond, eventually provided power for the Washburn and Moen Northworks complex, which by 1865 had become the world’s largest wire mill. The mill manufactured barbed wire, piano wire, and other wire products. The complex still stands, but today has a mixed use.

With the advent of the Industrial Revolution, waterways became an important concern. The 45-mile long Blackstone Canal, which opened in 1828 and connected Worcester by water to Providence, RI, provided Worcester access to the Atlantic Ocean for fast transportation of goods. The brook that flowed to Salisbury Pond, running out of North Pond, known today as Indian Lake, was one of the contributing headwaters of the Blackstone Canal, providing power for many mills over time.

In 1865, Ichabod Washburn and a Templeton, MA tinware entrepeneur, John Boynton, founded the Worcester County Free Institute of Industrial Science. Stephen Salisbury II, who donated a major portion of his land for the Institute, was named the first president of the Institute’s Board of Trustees. The Institute would later be known as Worcester Polytechnic Institute (WPI). The collaboration between Boynton, who taught science, and Washburm who taught vocational skills, led to the university’s philosophy of “theory and practice.”

Stephen Salisbury II and his wife Rebecca Scott Dean had one heir, Stephen Salisbury III (1835-1905) who, like his father, became a wealthy civic leader. In 1887 Stephen III donated 18 acres of his family’s farmland that had once served as pasture to the City of Worcester to become a public park. “Institute Park” would benefit students of the Institute as well as all Worcester citizens. The park operated in the tradition of an Olmstedian landscape park serving as a tranquil refuge against a rapidly industrializing Worcester. Salisbury paid for the park’s upkeep and many of its structures, some of which still stand today. Salisbury limited the implementation of flowers and shrubbery to allow open space on which park visitors could roam.

In 1970, a Task Force was created to clean up Salisbury Pond, which had suffered from pollution created by a number of sources:  drainage from highway construction and upstream industrial sites, as well as weeds and algae in Salisbury Pond. WPI students joined the effort. That led to the city enlisting a Navy team which helped dredge 5,000 cubic yards of sediment. However, another 15,000 cubic yards would need to be removed for dredging to be effective. In 2005, the non-profit group Friends of Institute Park, Inc. was established to benefit the park and the pond. The group advocates for park improvements and for securing funds to cleanse Salisbury Pond via dredging and the installation of a forebay (continual water purifier).

In 2011, WPI entered into a payment-in-lieu-of taxes arrangement with the City of Worcester to fund improvements to Institute Park and the Worcester Public Library. The park has been the site for community-wide gatherings including the Black Heritage – Juneteenth Festival, the Worcester Caribbean American Heritage Festival, and the Worcester Pride Parade and Festival.

In 2021, The Commonwealth of Massachusetts and the City of Worcester funded improvements for Institute Park’s Philip E. O’Connell Athletic Field (named for a former teacher-coach of the former Worcester Vocational High School), a firefighters' memorial, and the creation of an elevated walkway over portions of Salisbury Pond.

All photos from the collection of Worcester Historical Museum, Worcester, Massachusetts